While most systems with SHF hardware utilize PAM-4 to increase the total capacity, there are still many applications where NRZ has proved to be the more simple and more powerful signaling format especially at extremely high data rates.

SHF’s extender head approach provides a high degree of flexibility for the generation of ultra-high-speed-data. By choosing the fitting extender head(s), the SHF 12105 A Bit Pattern Generator (BPG) line rate can be significantly increased (at least doubled), as well as different signaling formats can be realized.

In the application outlined below, four SHF C603 B 2:1 Multiplexers are connected to an eight-channel SHF 12105 A Bit Pattern Generator. Every two of the eight NRZ BPG channels are multiplexed to a NRZ signal of double the speed. This way, each multiplexer can generate a signal from 12 to 128 Gbps (gap-less), providing a maximum total capacity of 512 Gbps.

Newer generations of the SHF 12105 A BPG can be synchronized. By synchronizing two of such set-ups the maximum total capacity will exceed the 1 Tbps (one terabit per second) threshold. 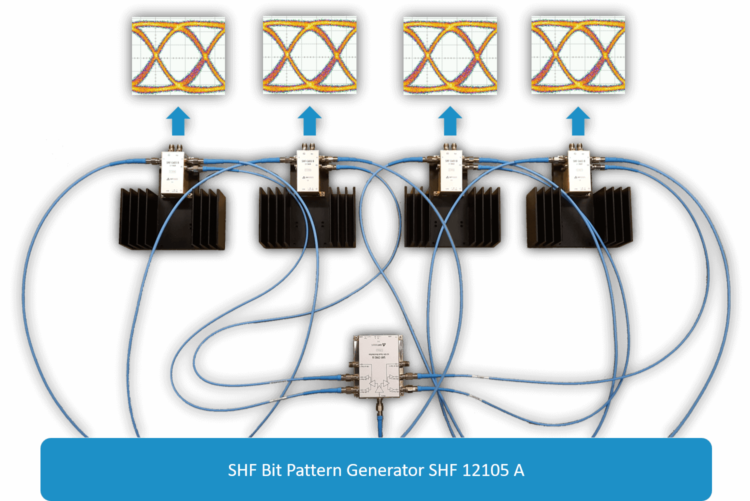 The SHF multiplexers are active modules which retime and resample the input signal from the BPG. This way, these compact modules can be placed close to the device under test, thus minimizing any impact on the signal fidelity. This is indispensable as transmitting 100 Gbps through long cables will significantly degrade the signal quality, increasing the rise and fall times as well as reducing the effective signal amplitude.

For the active retiming each multiplexer needs a clock signal at half the output speed (e.g. 50 GHz for 100 Gbps). In the above setup, the single main clock signal is taken from one of the clock outlets of the SHF 12105 A BPG, whilst the new SHF C992 A module distributes this clock signal to all four multiplexers in synchronization.

For more details you can find the data sheet in our Bit Error Test product section or directly here: