Introducing the improved SHF 616 B

If you thought SHF reached the limit of what is physically possible by generating 112 GBaud (224 Gbps) with the SHF 616 A, you had not been 100% right. We have now further pushed out the upper speed limits by releasing the improved successor, SHF 616 B.

For this new generation of PAM4 Multiplexer (PAM-MUX), we specified the maximum output data rate to 128 GBaud simply for the reason that we currently can only measure BER to this baud rate (after demultiplexing the full scale 128 GBaud NRZ signal) and confirmed it being ‘error-free’. In the data sheet, we also included the 130 GBaud PAM4 signal for reference. If you have a powerful DSP available, imagine how far you could drive it. 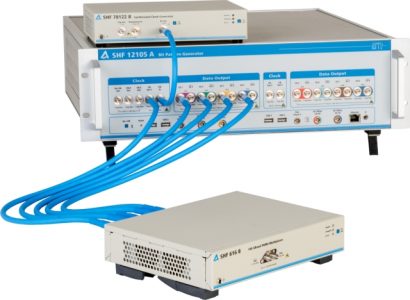 Ideally this extender head PAM-MUX is driven by our multi-channel Bit Pattern Generator (BPG) SHF 12105 A. By the use of our complementary software package SHF Control Center (SCC) the system is operated like one single 130 GBaud instrument. However, SHF also confirmed proper operation even with other vendor’s high sample rate AWG systems.

The full data sheet can be downloaded here.